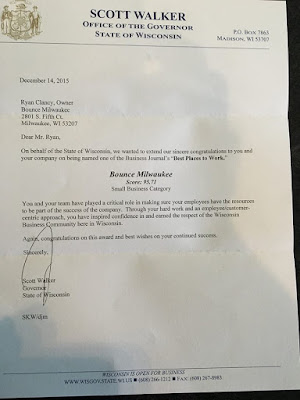 Governor Scott Walker sent a letter of commendation to a small business owner in Milwaukee, congratulating him on being named one of the "Best Places to Work."

The small business owner responded. And how [see below].

Turns out the small business owner, Ryan Clancy, is a former teacher in Milwaukee Public Schools, who was driven from his profession by the very policies Walker set in motion, including the largest cuts to public education funding in the nation,  which led to his own school being shut down.

I am honored to share Ryan Clancy's letter here and invite you to read it carefully, share it widely, and take to heart the message it reveals: when we support policies that undermine public schools and the educators entrusted to ensure they succeed, we turn our backs on the children of this state. A truly successful economy means everyone is respected, and everyone thrives.

On behalf of the State of Wisconsin, we wanted to extend our sincere congratulations to you and your company on being named one of the Business Journal's "Best Places to Work."
Bounce Milwaukee
Score: 95.17
Small Business Category

You and your team have played a critical role in making sure your employees have the resources to be part of the success of the company. Through your hard work and an employee/customer-centric approach, you have inspired confidence in and earned the respect of the Wisconsin Business Community here in Wisconsin.

Again, congratulations on this award and best wishes on your continued success.

On behalf of myself and my employees, we wanted to extend our sincere thanks to you for making this business possible. You and your team played a critical role in inspiring us to open our doors. As a former public school teacher, your legislation made abundantly clear how much you value the students and profession to which I had devoted my life.

Had I not been stripped of my autonomy and respect as an educator, and had my school closed by budget cuts, I never would have decided to become a job creator, thereby earning the acknowledgement from our governor that I never saw after more than a decade of teaching.


I do work hard, though I work fewer hours than most of the dedicated teachers that you frequently demonize and undermine. I also work less hard than my wife, who owns more than half of the company and also did not receive commendation from you. On the up side, I have more time to devote to politics now, especially if you decide to pursue a third term as governor.


We won this accolade because we treat and compensate our employees fairly, and realize that they are responsible for our success. If you'd like to stop by, we'd be happy to show you that valuing employees (and people) is not only the right thing to do, but leads to growth, success, and respect.


Condolences on your failed presidential bid and lack of job creation.