Callen Harty: Walker recall is not a referendum on collective bargaining 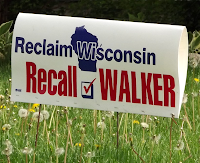 Callen Harty posted the following open letter, A Reply to Scott Walker, in response to a letter he received in the mail from the Walker campaign, asking "for a donation to help him defend himself against attacks from the left and the unions." Callen writes: "This is the letter I am sending out to him tomorrow (and he gets to pay the postage)."

This letter sums up so much about what is wrong with the way Walker has deceived us to the very end, and I'm honored to share it here with Callen's permission.   This is his second guestpost on MoD. The first, an open letter to Scott Fitzgerald, is worth reviewing as Fitz faces his own recall on June 5th. Please be sure to check out the original post on his wonderful blog, A Single Bluebird.

And with just 2 short weeks to go before the recall election, I encourage all of you to share your thoughts with your local papers, or send to me and I will post on the blog. Take the MoD Open Letter Challenge and speak up now against Walker's unjust, unfair and unethical governance or forever wish you had.

Thank you for your personal letter to me asking me to donate money toward your goal of $400,000.00 to help defeat Tom Barrett in the upcoming recall election.  I will tell you first of all that I am an independent voter and have voted for both Republicans and Democrats in the past, among others.  I must also tell you that I’m afraid I’m not rich enough to be one of your donors, and neither are most of the Wisconsinites I know, many of whom are suffering under the policies you have pushed through in the last year.  But even if I could afford it I would more likely donate it to a candidate who shows a little more fiscal responsibility than what your campaign has shown.

You say in your letter that the opposition is raising money in breathtaking amounts.  Yet all of the news media, liberal and conservative, has repeatedly reported that you are raising far more money than Tom Barrett and the Democrats.  You have raised more than $25 million dollars already, two-thirds of it from out-of-state donors, and I’m guessing they might be expecting something in return.  Most of that money was raised in the last half-year and most of it came from a handful of very wealthy benefactors.  Have you spent all that money already?  Are they okay with that?  How could you possibly need almost half a million dollars more?  Clearly, if you are running the state of Wisconsin the way you are running this campaign I can see why we are in so much economic trouble here.

Let me be clear about this:  I am not a huge fan of either the Republicans or Democrats, but I do not believe you when you say that the “Liberal Democrats” bent to the will of big labor leaders in Chicago and Washington.  I believe that the Democratic Party tends to be the party of the working class more than the Republican Party does, so yes, they may have supported legislation that labor may have liked.  But labor is not about union bosses—it is about the common man or woman working the assembly line or teaching or laying bricks for a living.  If the Democrats pass laws that support working class people, then I am for them.  My grandfather was a miner, my father a painter.  I come from working class people and although I have never belonged to a union I believe in the dignity of our working class and poverty-stricken citizens.  Nobody deserves to be disregarded or discarded.

In your letter you say that with “clenched fists, obscene signs, screaming chants and un-Wisconsin-like tactics, I’m being attacked with a ferocity that Wisconsinites have never seen before.”  I have been at the Capitol during the peaceful protests this past year.  I have seen thousands of people behaving well and letting their feelings be heard.  I have also seen people yelling “Shame” and other things at you and some of your legislative allies.  It is because the people of this state feel that you have attacked them with a ferocity that is un-Wisconsin-like.  Never before have we seen so much disregard for openness, so much bullying in the Capitol chambers, such rude dismissal of the other side of the aisle as we have seen under your leadership and that of the Fitzgerald brothers.  You “dropped the bomb”, you tried to “divide and conquer”, but what you did was awaken a sleeping giant.  You have united people in a way that the Democrats have never been able to do.  Yes, the people are angry at you.  They have every right to be.

The “Madison Liberals” and “Union Bosses” you speak of may be trying to make an example of you as you assert.  It is their right politically.  But for regular Wisconsinites like me this election isn’t about the unions.  Yes, I am incredibly unhappy with what you did to collective bargaining, but even moreso at the way you did it.  I am also unhappy to see my niece and her family taken off of BadgerCare because of your cuts.  I am unhappy to see what used to be the finest educational system in the country gutted because of your priorities.  When corporations are owners of our school systems and making profits off of it instead of cities and towns having local control the people of Wisconsin will see what they have given up.  I am unhappy about your horrible record on environmental issues, the incredible loss of jobs we have seen, your attacks on Planned Parenthood, your positions on LGBT issues, and more.  This election is not a referendum on collective bargaining.  It is a referendum on the totality of your short tenure.

Earlier today you released a revised set of job numbers.  You say that Wisconsin is heading in the right direction.  If backwards and downwards are the right direction then I guess we are doing fine.  Every state in the union—including Wisconsin until the numbers showed us losing more jobs than any other state in the country—has used the same set of Department of Labor statistics to show job growth or loss.  But today you released numbers showing we’ve gained 23,000 jobs (which, even if it were true, is not even 10% of what you promised us).  It is not only disingenuous, it is a lie.  The people of the state are losing jobs and suffering under your budget cuts.  According to the Bureau of Labor Statistics Wisconsin lost 23,900 jobs and no other state lost more than 3,500 between March of 2011 and March of 2012.  45 of the states gained jobs or stayed even in that same span.  Is the federal government in collusion with “Liberal Democrats” and “Big Union Bosses”?  How else could they come up with such numbers when you can come up with just the opposite?  Simply put, Wisconsin is not open for business.  It is open for businesses, for corporate benefactors who stand to gain from your giveaways to them and takeaways from the people who live here.

I will not be sending you a donation and I will not be voting for you.  I am confident that you will not see this letter, because you have yet to listen to regular Wisconsinites the way you listen to out-of-state millionaires and billionaires.  I wish you well in whatever you pursue after the governorship, but I hope with everything that is within me that your new career path will start in the next few weeks.